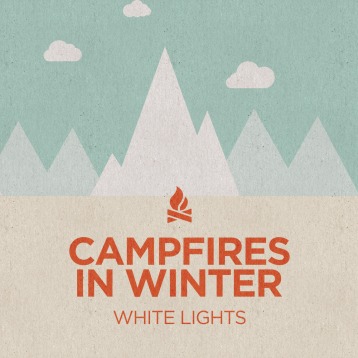 I quite like the single art work. Who designed it? Simplicity itself compared to a Biffy cover, but it is just as effective. Will the little campfire carry forward as a bit of branding?

“The artwork was designed by a friend of ours called Geo Chierchia (Eleven Eighty Seven). We had originally planned to do the artwork ourselves but asked Geo to design a poster for the gig. The idea he came back with was fantastic and we took the decision then to ask him to design the CD artwork too. I think we probably will continue to use the wee campfire, aye. It’s weird because one of the first things we decided when we chose our band name was that we could never use fire, campfires or winter on any artwork. And then when we saw Geo’s design we just thought fuck it, that looks really good.”

Not being a stranger to the band, I took a great interest in listening to ‘Cardboard Ships’. I was quite surprised by how much more I liked it than I remembered. I didn’t recall it being one of my favourites from the early recordings. I’d certainly think of it as one now. It is remarkable how nicely you’ve polished it up and given it a deeply moving new musical underpinning. Are there any other older songs that have been reworked?

Our songs are always developing really. We’re always looking for ways to make them better. Cardboard Ships was one of those ones that, when we listened back to it, we felt could be better. In fact, there was an acoustic version we recorded for a radio session once that this new version is actually based on. We just wanted to make something epic and beautiful (despite the dark subject matter) because we felt it was a good enough song. We are taking the same approach to a few older songs too, one of which is ‘They Looked Just Like Fallen Leaves‘. We’ll see how it all goes.”

The new single ‘White Lights’ seems to be richer and a little more musically diverse. Is it a good indicator of where your song writing is taking you?

“Lyrically, it’s a little more personal than much of our previous material. I feel that I’ve shied away from writing about personal stuff in the past and that, while I like writing about imaginary situations happening to imaginary characters and having those same characters appear over different songs, I should open up a little more. I think that’s something I’d like to carry on. Musically, it’s maybe a bit more poppy than we normally are – a bit ‘straighter’”

Is the single a solid step toward an upcoming full length? (please assure us that an updated version of ‘Before The Owl Will Fly’ will be there as well)

“Yep. The next step after this will be an EP in the autumn, then a full length album sometime next year. As for ‘Before The Owl Will Fly’, I certainly hope so”

What do you think of the new Fake Major single?

“I really like it. I was sorry to hear Endor had finished because I thought they released a really fantastic album and didn’t really get all the recognition they deserved for it. But aye, it’s great. It’s a bit more atmospheric than Endor, and kind of feels like how they might have progressed had the stayed together.”

Ever since starting up the vinyl collection again, quite a few 7” singles have travelled across the Atlantic. I was just looking at the stack of them and marveled how much more substantial (and artistic ) they were compared to CDs. Do you still buy them? If so, what were the last 2 or 3 you’ve picked up?

“I do indeed. In fact when it comes to new releases I try and go for vinyl over CD if the option is there. My last vinyl purchase was Frightened Rabbit’s Pedestrian Verse with the Dead Now 7”. Over the next few months I’m planning to look back at my CD collection and get some of my favourites on vinyl too.”

Right now advance copies of the single seem to be attached to the launch gig. What forms will it be available in after that?

“It’ll be available as a digital download and a limited run of CDs. No vinyl this time I’m afraid but hopefully we’ll get some of those done for a future release.”

The Campfires are pretty clear in stating who their influences are. Take a bit of Frightened Rabbit, a little Twilight Sad, and some of the more raucous potential of their own early demos and you’ll just begin to describe their sonic potential. Perhaps oddly, I’ve always been a little bit afraid that Campfires in Winter would be dismissively compared to them by ‘critics’ who then commit the additional sin of failing to appreciate the  warmth, depth and range to be found in their music. Obviously, the musical terrain they tread on is similar – To American ears it is almost stereotypically Scottish. But that’s the thing about stereotypes – they are exactly that for a reason.

It is almost impossible to grasp that the band is just releasing their debut single considering how good their demo catalogue is. A revamped version of ‘Cardboard Ships’ included on the single highlights the strength of their musical development. Editing this section queues the song in my mind and now I’m compelled to listen to it yet again.

“We’ll get as far as we would in the sea on a cardboard ship as we would in the air on a paper plane trip”.  Soaring poignant vocals flowing on a low sonic wave that opens up to a beautiful mid song instrumental melody that ushers in the next vocal round before ending in a slow washed out organ (or whatever sound it is) fade. When done – it begs to be played again from the beginning. This is no B-side.

With the introductory musical paragraph of the longer version neatly truncated, the shorter version lunges into the vocals almost immediately. “It will take 3 parts liquid and 2 parts luck”. Radio friendly and possibly more engaging; I rather like having both included even though there is not much difference after that. Interestingly, the vocals have been confined to the first part of the song allowing the music and guitars to have more expression than ever before. Describing it won’t do it justice (at least by me) and to be honest it isn’t something you’ve not ‘heard’ before. It is, however, a song that is better than the sum of its parts.

My reaction to this single oddly mirrors my reaction to the new Frightened Rabbit record. For them it is a very positive course correction and for the Campfires it is the herald of a potentially incredible debut album to come. Hopefully they’ll go as far.

For a little extra treat, I came across this clip of this acapel-a-coustic version of ‘See Us There, Both.’and don’t forget to get the actual demo here.