It isn’t very often that we get to see 3 different Scottish bands on separate nights all within a week. If it wasn’t for the sunshine, you might think we were in Glasgow. The flurry of shows started at the Independent, made a welcome departure to the Fillmore and ended, rather triumphantly, at the Rickshaw Stop.

As great as it was being at the first North American show for Chvrches at the Independent, what we were really looking forward to the most was seeing the Twilight Sad anywhere else. Each of the three times I have seen them there, I’ve always walked away with the feeling that the venue let everyone down in terms of how they handled the sound. Having the band open for Frightened Rabbit the following night at the Fillmore would finally put this to the test. To be fair, the experiences were also hindered by my own expectations. Watching many of these performances on the internet makes one’s desire to hear the vocals uppermost in the mix self-explanatory. After finding out that this tour would feature a ‘stripped back set’ we were elated. Never before has an empty chair, sitting on the stage of the Fillmore, generated so much anticipation.

The payoff was even better than we could have hoped; two people sitting down providing the music and one person standing, gesturing, at times seemingly having a conversation with the song itself, singing his heart out. This was the kind of Twilight Sad show I’ve been longing to hear these past six years. The beauty of the Fillmore is that it doesn’t really matter where you stand, the acoustics and sight lines are exemplary almost everywhere. On the other hand, since watching James Graham sing is as inherently entertaining as hearing him, we placed ourselves dead center one row back from the guardrail.

There were a few people telling their friends how good and under appreciated the Twilight Sad were, but for the most part I got the sense that people had primarily come to see Frightened Rabbit. The pairing, in addition to not having to suffer through a third local band, was inspired. Without a doubt, this was the best combination of two bands I’ve ever had the pleasure of seeing. A few steps above the dynamic of one man and a guitar and miles removed from a full opening band trying to upstage or hold their own against the headline act: it perfectly set the table for the Frightened Rabbit set that followed. By now, generally speaking, most crowds know what they are going to get from a Frightened Rabbit show. The most satisfying part was sensing their positive, at times awed, reaction to what was offered up by the Twilight Sad. They couldn’t have expected how powerful and moving it was; we couldn’t have been happier by how much our own expectations were surpassed. When the Twilight Sad was finished, Pedro and I agreed that we could have walked away and been perfectly content. Hopefully, having played to a sold out crowd at the Fillmore, and the support slot throughout the rest of the tour, this exposure will translate into further North American momentum.

And if that wasn’t enough, I got to do it all over again four days later at the Rickshaw Stop.

I ended up attending this show alone. The venue’s maximum capacity is less than 200, the sightlines are somewhat difficult, but the sound is surprisingly good. Literally standing at the corner of the stage a foot from the face of it, I was in a position to experience a set that was even better than that of the Fillmore. Andy MacFarlane’s guitar was perfectly pristine, sounding as good as if you were sitting in front of the amp yourself. Mark Devine’s keyboard work was relaxed and much more evident than on the larger and higher stage at the Fillmore. During that set, at times, it seemed that some of the drum loops were more dominant than the keyboards and that gave the overall sound a slight canned effect. This time keyboard, single guitar and voice were perfectly matched and balanced for a much more organic feel. I was actually positioned behind the PA speakers and for the first time, much like this video, I was able to hear James Graham almost as if without  microphone. This was The Twilight Sad in its most essential form. Underneath the layer of noise, the loud volumes and otherwise engaging mayhem this was the band stripped to its heart and core.

Seeing them twice in a week was far better than I could have hoped. The Fillmore represented an audience size that they more than deserve by now and hopefully the exposure on this tour will help to ensure it for the future. At the same time, the show at the Rickshaw for the Twilight Sad fans, who remained after the local support from the two local opening bands filtered out, were treated to the kind of show they could only have experienced back near the beginning. For myself, it was the perfect squaring of the circle. I will readily admit this though – the next time I see them, I want the volume at 11.

Being at that first ever Twilight Sad show in SF, were only 14 people (one of them being my wife) remained until the end, had an unexpected dividend of good will as well. The second Twilight Sad show this week was on the 15th of March. Since the Rickshaw always goes past midnight, I anticipated spending the first hour or so of my Birthday there as well. I was able to ‘finagle’ a Twilight Sad birthday card before the set began. Much to my surprise partway through the set, at exactly 11:59 no less, the gap between songs was filled by James Graham pointing me out and dedicating the next song. As the other people wished me well, ‘That Birthday Present’ ushered in the first few minutes of my 49th. 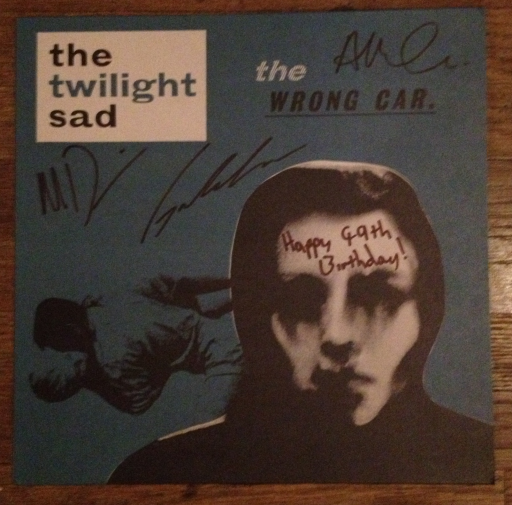 Leaving the venue, about a half a block away, a person leaning against the wall wished me Happy Birthday again as I passed. Happy week and Happy Birthday indeed.