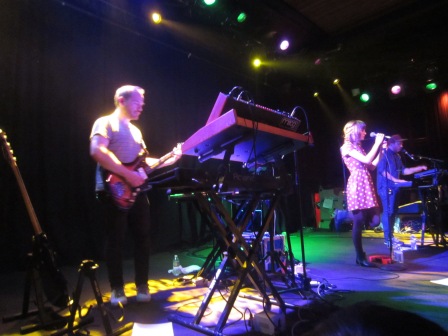 When I first heard that Chvrches would be attending this year’s SXSW, the thought of heading down crossed my mind. Every year sets off the hope, usually dashed, that some of the Scottish bands who make it down to Austin might come further north-west. You can imagine how pleased we were to find out that the first North American show would end up being right here in San Francisco.

Nothing illustrates their rapid rise more than the fact that I don’t possess a single EP or album. I did have the 10” single in my cart but just couldn’t justify the 10 pounds shipping. Sadly there wasn’t anything musical to buy from the merchandise table last night. Going into a show only having heard 3 songs on the internet and having watched a few live clips is almost antithetical to an old timer like me. I learned from some of the younger people after the show that this is actually pretty normal for today’s generation. While it was nice to have seen one gentleman with a beard whiter than my gray, for the most part I’m rather out of place.

I’m always fascinated by the totally different crowds at every San Francisco show I attend. I’m a constant, but why is there almost never a familiar face?  I conducted a non-scientific survey of the crowd before and afterward and it was pretty evident people were there because of the ‘internet’ through links and cross recommendations to bands like Grimes, Purity Ring and remixes from people they followed; more of an electronic music slant and all perfectly understandable.

For fun I asked a few people if they had heard of Blue Sky Archives, Unwinding Hours and The Twilight Sad. I didn’t find anyone. Had I brought up Aereogramme (and I am trying to cut back on doing that) the looks would have been even blanker. As it turns out, as I learned from this local press piece, even I had not realized that Martin Doherty was the touring keyboardist there as well. Until yesterday, I thought I had only seen Martin twice at the Independent playing for the Twilight Sad. Clearly my perspective and ‘path’ to the show was different than most of the people who wouldn’t have been allowed in back then even if they were fans. I’m pretty sure it also influenced my decision to stand on the side of the stage with the mighty Iain Cook.

Predictably the ten song set was bookended by ‘Lies’ and ‘The Mother We Share’. I should have even expected the Prince cover that was offered as an impromptu encore. (as good as it was, I would have loved some Altered Images) My favourite place to be at the Independent is right at the side of the stage. You can feel the air pushed by the drums and hear the guitars from the amps as opposed to the PA. Obviously, I didn’t properly think that through for a Chvrches show. It was quite odd to see the opening act drum kit pulled away and nothing brought back to fill the empty space. Not since Glasvegas, have I been to a show where the main act was so lacking a proper drummer.

I’m really not trying to be dismissive. While the 80s are too far behind me to be swayed by instrumentation alone, it was truly astonishing to see how much was done with so little. I was very intrigued by the use of a Maschine (I broke down and picked up a Mikro myself to play with) to provide the distinctive sampling riffs and some percussion. Not a fan of the online finger dexterity demos, it was nice to see it used to good effect in a serious live setting. I’m actually quite partial to the bass playing keyboard player and was impressed with how much Iain Cook was doing and how fluidly it was executed. Seeing the Fender sitting next to the Moog was encouraging as well.

I can’t pretend it was the most exciting show I’ve been to; although there was never a moment where I lost interest.  Not having heard the bulk of the set before shouldn’t really have mattered but it did dampen my emotional reaction. I did get a sense that some of the songs were still underdeveloped and suffered a little from their essential similarity. As incredible as Lauren Mayberry’s voice was, I really appreciated the song sung by Martin Doherty and some of the backing vocals provided by Iain Cook to change up the dynamics. That I woke up this morning with snippets of music and lyrics running through my head that I can’t place is proof enough that, overall, it worked. The internet personal recording device age is quite fascinating as well and this  clip of ‘Science and Vision‘ is a good sample of the middle of the show set. There is a good deal of potential here and I imagine that the first record will be quite exceptional. Given Iain Cook’s prodigious talents that is almost a given.

In terms of a triumphant ‘return’, it can’t be stressed enough how wonderful it was. The crowd seemed to really enjoy it, the place was sold out and the band was touched by the positive warm reception. There was one young lass who specifically went to Scotland to see them. It made her night when Lauren Mayberry recognized her and pointed out her dedication. It really doesn’t matter that this old curmudgeon was reminiscing about the old days when bands walked in the snow to play to thirty people.

Ironically, the impending arrival of Chvrches prompted the discovery of the local band Churches. I’ve already seen Dominic East (1/3 of Churches) perform his own material and was blown away. For a chuckle, I got to tell him about the Glasgow version and am looking forward to seeing the full band play ‘Lovelife‘ soon.

Why so excited? It is not at the Independent (where the monitor I was standing next to wasn’t turned on until the 6th song) but at the Fillmore. My theory that the Independent sound guys were diminishing my enjoyment of a Twilight Sad show is about to be tested.

update: Here is the bulk of the show, I must be lurking somewhere in the dark lower left corner of the stage.

One thought on “Chvrches: Live in SF”