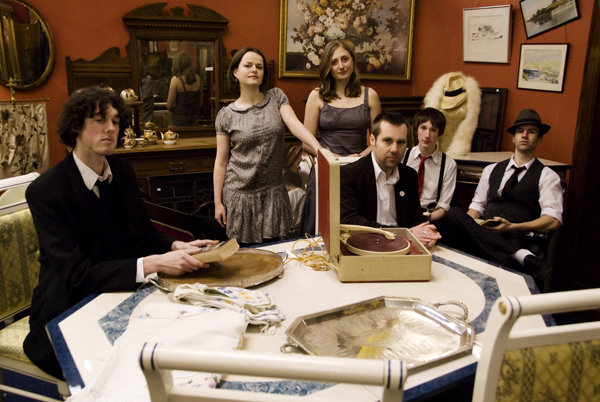 I have not listened to your debut ‘The Ship and the Iceberg’ in a while. After a few spins, I’m happy to report it is as lovely as remembered. One of the pitfalls of digital albums, I suppose, is that it is easy to lose sight of them. Were you pleased with the reception it got when it was released?

GB:  “Thank You I’m glad you still like it! Don’t leave it so long next time.

I don’t know any band that is ever totally pleased with the reception their work gets, the bad reviews, the bad comments and the bad gigs linger much longer than any of the good stuff. This is a curse and a blessing as it spurs you on to work harder and keep trying to improve. Obviously, we are very grateful to the people that said they liked it and that it meant something to them, that also gives you a purpose to carry on. It’s odd when people come up and tell you a song you’ve written has made them cry, should I really be pleased about that?! Well I am.”

While going back and glancing at a few reviews, I kept seeing ‘Americana’ referenced. I’m not necessarily convinced of that label. How would you characterize your sound?

GB: “Americana is a weird term isn’t it? It seems to mean very different things to different people. You must know people in bands hate trying to define their sound in those terms so uhm…..I can tell you I’d like us to be a pop band!”

PM: “I’ve always thought we were more of UK Garage sort of group, with elements of Shabba Ranks, obviously. Are those references going to make sense to anyone outside the UK? Was ‘Mr Loverman’ by Shabba a hit in the States? Well, anyway, we sound just like that.”

Speaking of influences, I often wonder if what a band likes to listen to ever translates into the kind of music they actually set out to make. I can’t imagine that this is the case for anyone worth listening to that manages to forge a unique sound. Are there any Scottish acts that you’ve been especially inspired by?

GB:  “I like lots of Scottish bands and have been inspired by many of them in different ways. It seems to be a Scottish trait to stay honest and never compromise and I find that inspirational. Of course, Fence is a prime example of this. Stargazer by The Zephyrs is a particular inspiration for me, it’s a truly beautiful song. That, anything by Ivor Cutler and Cod Liver Oil and the Orange Juice by Hamish Imlach are probably enough to see you through the hard times.”

PM: “Personally, my favourite Scottish bands are The Blue Nile and Orange Juice, with a bit of Associates thrown in for good measure. I wouldn’t say we sounded at all like any of them, but I think they all had an attachment to Glasgow and that had an effect on their music at some point. ‘Hats’ by The Blue Nile in particular has a special resonance if you’re from this city or have ever lived here, lots of rain soaked romantic imagery. Glasgow, and Scotland as a country works it’s way into our songs too. You could say that our geography has influenced us as much as Scottish bands have. That said, I wish had I made ‘When The Haar Rolls In’ by James Yorkston, very much a benchmark of loveliness as far as I’m concerned. “

So there is a new record on the horizon. I just listened to ‘Kittiwake’ and it sounds like a natural progression not a radical departure. Do you have any surprises up your sleeve? When can we anticipate a release? Please feel free to share any other details you’d care to share. I can’t promise complete anonymity anymore, as a few people are actually reading, but what would it hurt to tell a few of us?

GB: “You’re right that the new stuff is a natural progression rather than a radical departure which is what we needed to do. We have become a much better band and the songwriting is stronger, but I felt it important not to stray too far away from the sounds of the first album. The aim was just do it more cohesively and to a higher standard and I think we’ve done that. I do really admire acts that constantly change whilst kind of remaining recognisble, you know like PJ Harvey does that so well. Eels do it too. So I think the next one we do will have quite a different sound to it, anyway I’m getting ahead of myself here!

Any surprises? Well if I told you it wouldn’t be a surprise anymore would it?

We are talking to a small Glasgow label just now so we are hopeful that it will be out soon, it’s pretty much been finished since last autumn so it’s kind of burning a hole in our collective pocket at the moment.”

Are there plans to release it on vinyl? The warmth and dynamics of the new song make a strong case for it. I do have to ask what exactly is a Kittiwake? (Sunken American ship or vintage Dundee Inn?)

GB: “Sadly no plans to release anything on vinyl though it would be amazing to be able to do so. Just too expensive for this poor little band from Glasgow.  Ah google, it may be both of those things but it’s also a very pretty seabird, there used to be lots of them in Orkney but they are in decline. In the song they get mistaken for the more common seagull by the novice bird watchers. In relation to the song it’s also a kind of pathetic play on words: The song is about a husband whose wife collapes during a hiking experience and enters an endless coma. She is called Kitty so it’s his plea to her. I should’ve kept that to myself shouldn’t I?”

Favourite Smiths song? Favourite cover from the ‘Smiths is Dead’?

GB: “The feeling of joy I get everytime I hear the guitar intro of This Charming Man is something that has never diminished in all the years of listening to it.”

PM: “It’s got to be ‘Cemetary Gates’ for me. Followed closely by ‘There Is A Light….’. I’ve never got around to listening to Smiths Is Dead, even though there are some artists I love on there. The songs were just so perfect in the first place, I don’t think I could listen to anyone else doing them.”

If you had to describe the Glasgow music scene in a few sentences could you do it justice?

GB: “Like that drunken uncle at a family wedding: Funny, shambolic, scary, joyful, annoying, heartbreaking and always worth saving at the end of a long night.”

Is there anything else we should be looking for this year? Following up on the ground recommendations is a favourite pastime.

PM: ” Keep an eye out for Randolph’s Leap if you haven’t already checked them out. I think they’re my favourite band in Glasgow at the moment, great pop songs with wit, pathos and lovely arrangements. There will apparently be albums by both Endor and Washington Irving as well in the year ahead, so you should check them out. They’re both fantastic. Though I have been playing trombone and keys in both of them lately, so does that count as a genuine recommendation and not a self-interested plug? Well, anyway, I’m a proper fan of them both, and was long before I became involved with them musically so you should just take my word for it.”

‘The Tenderness of Wolves’ is an exceptionally lovely song. Apparently using a banjo might just be what gets your music labeled ‘Americana’. I should know better, but I’ve got to ask what the inspiration for the song was. The listener always constructs their own meaning, but I enjoy knowing where the idea stems from.

GB: ” Thanks, it’s easily the best song on the first album along with After the Fight. The germ of the song came after reading the novel of the same name. It’s a thriller set in the wintry wilderness of Canada and many of the characters are Scots settlers. The song doesn’t follow the narrative of the book at all but is inspired by the feelings it generated in me whilst I was reading it. The song has no specific story or message it’s more a song trying to evoke and make sense of certain feelings. Just the usual: a search for happiness in the harshest of environments, an interest in how the most savage of creatures can also be the most beautiful of creatures and a hope that there is someone or something out there to comfort and be comforted by in the darkest of times. We all need companionship of some kind. Don’t we? Is that close to your meaning?”

I was curious about Electric Honey label –  How was your experience with the venture?

GB: “Like most dealings with labels it’s a mixed bag, they helped us enormously to deliver an album with a nice Digipak and get it to lots of places we never could have on our own, they also funded a financially doomed venture to release a 7 inch single which I admired. It is hard to shake off the Belle and Sebastian reference in every review but that’s not really EH’s fault. What else? We had some fun with them but these were often troubling times for this State Broadcaster so sorry about that EH!”

How in the world does a group of students chose 1 artist to release that year? I can almost imagine the fisticuffs.

GB: “I think they have a pancake eating competition and the one that eats the most in half an hour without throwing up gets to decide.”

PM:  “And that glutton chose us! We’re the portly music student’s band of choice. Maybe we should put that on our press release.”

I should ask something deep and meaningful – but all I can think of is the usual plea for a brief review of an exceptionally good show you’ve been to of late. The ‘tyranny of distance’, to quote some old Split Enz, is harsh for a Scottish music blog based in San Francisco.

PM: ” I’ve been lucky to see a few great ones recently. One that stands out was a Fence Collective Christmas show in an old church near where I live. James Yorkston, The Pictish Trail and a wonderful Irish singer called Lisa O’Neill all sat on the stage together and took turns playing their songs, sometimes pitching in on harmonies or guitar when one of the others was playing. Fantastic songs, some laughs, a great atmosphere. It was one of the most charming gigs I’ve been to in a long time. There was even some rudimentary shadow puppety. Who else? Laura Veirs played here last week too, wonderful stuff. She’s quite something live.”

Just read that the new album is mastered. Very much looking forward to it.