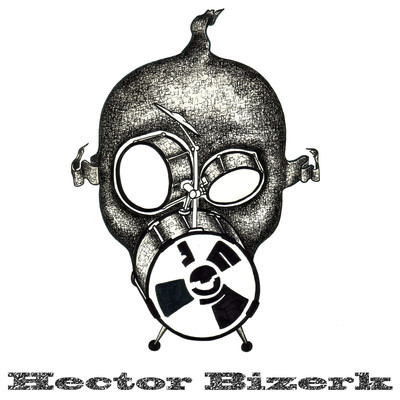 Not only did Pedro bring a couple of Irnbrus to our last blog meeting (excuse to go to a pub), he also brought this interview with Hector Bizerk. Who knew Shambles Miller was this influential.

Hip Hop (along with Jazz, Blues, Cheeseburgers, and Football) is something that fills me with great American pride. You seem to have a deep appreciation (from the graf writing reference on the Living With Rhyme EP cover art to youtube posts of the “golden years”, ie; Souls of Mischief) for the roots of our great homegrown musical export from the Bronx. What records influenced you along the way?

” I think without doubt America’s greatest export is hip-hop culture! Maybe I’m biased in that respect. I value the importance of Graf as a means of social expression, I’ve never done any major pieces myself, but I enjoy seeing European cities covered in colour and tags n murals.  It really gives you an idea of what the people of the city really think when you see the vibrancy in some of the graff in Paris or Barcelona, for example.  In Barca they have the whole Catalunian expression of identity and it works really well in a hip-hop sense.  You can see the oppression being detailed.  In Ireland too…there are walls full of political tags and cultured murals.  Graf gives a great sense of identity and understanding. Glasgow has some tight crews…Easy Riders are the most notorious.  You should check Akme’s work!

It’s hard to pin point any particular record that captured my attention when I got into hip-hop.  I suppose ‘Gangster Rap’ was massive in UK when I was just beginning to listen to music. Then I started to get into beatboxing through hearing Rahzel..and Bboying had always seemed the muts nuts.  The whole culture just seemed to project a positive mindset towards personal growth and mental fitness and that really appealed to me.   In Glasgow, Flyin Jalapeno’s are a Bboy crew who smash dancefloors in the truest sense.  They have members scattered accross Europe and represent the realness.”

I’ve seen hip hop live throughout the years and the sonic impact was more prevalent with live instrumentation in the mix (NaS & Damian Marley, Digable Planets to name a recent and an old gig). Though, I have a feeling that the lack of live musicians for the Watch The Throne tour is fitting and essential in presenting Hip Hop minimal and pure, kind of like you do. Was the idea of having a live drummer born out of necessity? Are you planning on experimenting with more sounds/instrumentation for future recordings and/or live shows?

“Everyone has their own interpretation of the essence of hiphop I suppose.   I agree with you about the live band stuff…I think The Roots are one of the greatest bands in history never mind what style of music they make.  ?uestlove is a genius and the lyrical ability of Blackthought is outrageously complimentary.  I always admired how they groove and moved away from simple 90BMP boombat style.  Their latest album has 4 classical concertos at the end. Nuff said!   Hector Bizerk was born out of a desire to really push ourselves.  Audrey is an incredible drummer..I’ve never saw anyone as talented as her. She’s a proper musician and songwriter too..but she smashes the shit out of a drum kit like no other.  I had been rapping for 8 years before we got together as a duo.  Usually playing with instrumental backing tracks and sometimes my mate Bigg Taj (the best beatboxer I’ve ever come accross)  We opened up for Grandmaster Flash at KillaKella in the UK which was phenomenal but since we started Hector Bizerk Audrey and I have both really pushed one another creatively.  We play rhythms a lot of drummers or rappers wouldn’t dare too and we take risks.  Holding an audiences attention with just drums and rap is a challenge we have proven ourselves capable of achieving.  We’ve supported Ghost Poet, Ugly Duckling and MF Doom in recent months and this month we are opening up for Sway and GZA of Wutang Clan.”

You’ve played on some interesting bills. Who is someone you would like to support/collaborate with?

“I’m open to collaborating with anyone who is on the same page as myself in terms of creative direction and commitment to making good honest music.”

You mentioned that Scotland’s Hip Hop scene goes back to the ’80s. Name some mcs that a newbie (like me) should check out to put together a mixtape of the evolution of Scottish Rap.

“It’s probably unfair to only name a few.  Talking about early hip-hop in Scotland you have pay your dues to Mistah Defy and Bohze of IITone Committee.  Dj Krashslaughta too. These guys really made it possible for Scotsman to rap and they did some touring and signed a major record deal back in the day.  Other notable contributors pre-digital era are Powercut Productions, Major Threat, Scotland Yard Emcees, ThisIll Crew.  Nowadays there are loads of emcees. Perfect Practise are a tight duo from Edinburgh emcee Nostal and DJ Sonny. They make feel good hip-hop that I bump regularly. Loki and Mog smash everything in Glasgow. They are lyrical socially aware emcees and that’s the sorta stuff that really inspires me.  Scatabrainz is the best producer in Scotland in my opinion too..I don’t think many would disagree.  Butterscotch is an emcee from Dingwall in the north of Scotland and he is so talented too, a genuine intelect and his vocab is outstanding.  He is part of Wookie Goldberg with another talented geezer called Skribbo.    Younger emcees I admire are Physiks and Konchis,Erin Friel, Kayce One, Factory Babies, GbH.”

Shambles Miller recommened you in a recent  interview. Have you seen his acoustic cover of “99 problems”? …Seems like a silly, fun loving guy. A quick glance at Glasgow’s varying “genres” and aesthetic styles in music paints a broad but singular Scottish take on rock and roll music. Is there a fair amount of support, inspiration, and collaboration between you all? Or are music and scenes sadly compartmentalized?  Are there any Scottish bands you recommend we give a listen?

“I haven’t heard Shambles version of that but I know he’s a talented geezer.

The Miss’s are one of my favourite bands.  Pure beautiful 4 part harmonys and excellent songwriting. They inspire me to be a better musician.  They are a million miles  from hiphop but I have an appreciation of expression in songwriting and they have soul like no other Scottish band.   I also like Rio Callahan and have collaborated with them before.   Tragic O’Hara is a blues player from Ayrshire with an incredible ability with a guitar. We are working on an EP together at the moment.  He does excellent covers of ~ODB and Cypress Hill.  Think they are both on youtube.  I admire his lyrical ability in his own song writing.  I also lyrically admire Becci Wallace who is a singer songwriter from Glasgow you should check out. She is collaborating with super producer Bill Breakz at the moment and they are incredible together.”

Is there a story behind the name, Hector Bizerk?

‘Yep.  Going Hector is a Glasgow slang term for …letting go and being a bit mad.  We just used it as a bit of banter at first and it ended up sticking.”

Who did the Hector Bizerk “logo” artwork and how do I get a t-shirt so I can spread the good word in San Francisco?

“Pearl Kinnear.  She is a full time visual artist from Scotland and is one my greatest inspirations.  We are proud to have a friend with so many talents.  You can view some of her work here   http://redperil.com/about.html    At our first EP launch Pearl designed a phenomenal banner and decorated the venue with loads of really special pieces of her art work and she is forever working hard on her own projects.  It is important that we appreciate the ability of others and be inspired by the ways they express themselves. The logo is Hector’s identity and is instantly recognisable.”

When Pedro first mentioned wanting to feature H.B., I gave a quick listen to the first EP on bandcamp. To be honest, I thought it was merely ‘allright’. Going back last night, I found the new EP ‘Living Off Rhyme’ and was thoroughly impressed on how much more open and daring it seemed to me. I don’t know the first thing about the genre, but I know what I like. The opening track ‘Tsunami’ is brilliant as is the last song ‘Train of Thought”. Not surprisingly, it is as poetic as Kevin Gilday. The three tracks in between are a good ride as well. The strength and effectiveness of the drumming really shines through  on this.  What I am starting to love most about the blog is how it is gradually expanding my musical horizons as I continue to explore the best Scotland has to offer.