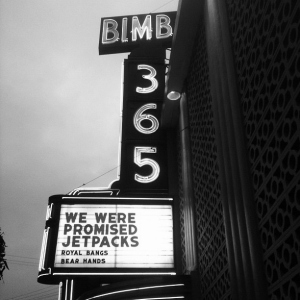 Circle and Squares followed by Quiet Little Voices sums up my feelings about the 3rd evening spent with We Were Promised Jetpacks. This was the first time seeing them headline and they did not disappoint – three times is still a charm. There is always so much emotionally invested in the first record, for band and fan alike. The place came alive whenever the ‘old’ songs were played with a notable amount of sing-along. My own reaction to the new record mirrors the preference for the familiar. Obviously, it reflects the difference in the amount of time spent with each record. Listening to the record again this morning, it is very easy to close your eyes and see the music in terms of how well it all worked live. I still lean toward the tunes from the first. I clearly appreciated some of the new material properly for the first time and that is a central purpose of touring, but on balance there was a structural and tonal similarity behind the new material, especially stretched over 90 minutes that became noticeable. I find the ‘perfect’ show is one in which you lose all sense of time and your thoughts never wander thinking about things like pacing, set order or your awareness of your level of engagement. The sound at the venue is probably one of the best in town. You just have to look up at the sculpted ceiling to see how much effort was put into the aural dynamics of the place. The overall sound was incredibly clear and detailed and as such the vocals truly shone through. Some overheard banter on the street marveled at the passion coming from the singer and remarked  that he wouldn’t be surprised if Adam suddenly just stopped and gasped; heart and lungs bursting from his chest because so much was given at the microphone. The performance was that powerful.

No one listens as intently or sternly as I do. If you were to go by the look of my face you might mistakenly think I’m not even enjoying the show. I listen to records by staring at the speakers to give you some idea how intently I listen to the sound. Perhaps my formative teen years spent behind an 8 channel mixing board has something to do with it. The beauty of the Jetpacks is subtler than most American audiences are used too. At times there is undeniable breathtaking musical beauty and at other times it much more deeply hidden and subtle. I should try to come up with some Scottish winter landscape reference or other, but I’ll just say some of that beauty and majesty does manage to find its way into the soul of the musicians and music. Was it perfect? No. As a comparison – seeing Frightened Rabbit for the 5th time at the Fillmore, I’d say it was. The 3rd time at the Independent not so much – in fact, I’d say the Jetpacks stole that show. It was grand and majestic. A little more thought and practice on how to fill that much time will go a long way to making it so, as will a larger catalogue to draw from. I’m still on the fence about album two. Rave (and justifiably so) reviews aside, I’m still of the belief that it is a sophomore record that promises that the best is yet to come. I can’t wait to hear them when they eventually tour the third.

For one night at least, we didn’t wish we were in Glasgow or Edinburgh (to be more precise).